A real danger in reading my blogs about caring for “flocks and herds” (investments) is that all investments and wealth can become either the end or the purpose. As a purpose, at best, they are only a temporary resource that can be put to work with judicious sharing and giving. Never make the mistake of substituting temporary wealth for eternal treasures. Moths and rust and thieves cannot get to your greatest treasures. And, never forget, your worth is NOT in what you own. It is not in your title or your skills. Your worth is much greater.

Keith and Kristyn Getty and Graham Kendrick capture the reality in their song “My Worth is Not in What I Own.” Listen to the words (link at the bottom of this post) and realize that your worth has been set very high by the One who created you and died for you. The symbol that makes this crystal clear is the cross.

Hebrews 11:24-26 (ESV) “By faith Moses, when he was grown up, refused to be called the son of Pharaoh’s daughter, 25 choosing rather to be mistreated with the people of God than to enjoy the fleeting pleasures of sin. 26 He considered the reproach of Christ greater wealth than the treasures of Egypt, for he was looking to the reward.”

My Worth is not in What I Own

Here is a portion of the lyrics that you can hear on YouTube. 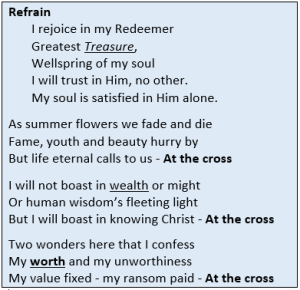 ADVANCED BIBLE STUDY! Using the Bible to Understand the Bible!

A Mind Free To Think

My Life in Our Father's World

Life in the Spacious Place

Finding God in the Everyday

Finding the extraordinary in the midst of the ordinary

An Interior Designer For Technology

Those Who Sin Differently

We often judge most harshly those who sin differently than ourselves...but there is hope for each of us

The Power of Story

Before I Forget: Sharing my love for God, family, gardens and my sweet Momma

Proverbs 27:23-24 “Know well the condition of your flocks, and give attention to your herds, for riches do not last forever..."