Proverbs 13:11 (ESV) “Wealth gained hastily will dwindle, but whoever gathers little by little will increase it.”

One principle that wise investors always remember is that there is more benefit in careful, systematic investment than in hasty, and often risky, short-term or speculative buying and selling.  I started working at a Universal Foods Corporation in 1976.  As soon as it was available, I took advantage of the company’s 401(k) plan.  Back then my starting salary was $600 per month.  As a married man, every penny mattered, but I realized that putting a small amount away for the long term was prudent.  If my memory is correct, I started with a 3% contribution.  That means the first month’s contribution was $18.  Over the course of a year, those $18 contributions would equal $216 plus any growth in the investments and any additional matching from the company.

One might say “why bother?”  If you look at the total at the end of the year you realize it isn’t even equal to one month’s salary.  That is where the power of time and compounding come into the picture.  If I had not contributed a single dollar after those first twelve months, and assuming the investments grew at a paltry 7% on average every year, that original investment would be worth at least $3,235 today without the company match.

The story doesn’t end there.  In 1999 I left Universal Foods.  By then my monthly salary had increased significantly. The percentage I was contributing was also much more than 3%.  Those investments were rolled into my own self-directed IRA at Fidelity Investments and they continued to grow.  Little-by-little I continued to add to my new company’s 401(k) and then at the company after that.  The first $18 wasn’t much, but the gathering little by little resulted in a significant resource that produces more than adequate income and more to share with others. 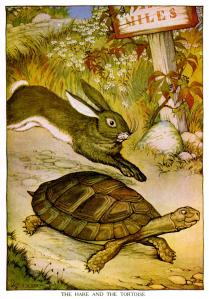 Remember the tortoise approach to success.  The hare might look like the winner with some initial spurts of great results, but the tortoise will win by faithful persistence gained over a long and careful plodding.

ADVANCED BIBLE STUDY! Using the Bible to Understand the Bible!

A Mind Free To Think

My Life in Our Father's World

Life in the Spacious Place

Finding God in the Everyday

Finding the extraordinary in the midst of the ordinary

An Interior Designer For Technology

A Stranger in the House of God

Those Who Sin Differently

We often judge most harshly those who sin differently than ourselves...but there is hope for each of us

The Power of Story

Before I Forget: Sharing my love for God, family, gardens and my sweet Momma

Proverbs 27:23-24 “Know well the condition of your flocks, and give attention to your herds, for riches do not last forever..."